"Out on the wiley, windy moors
We'd roll and fall in green
You had a temper like my jealousy
Too hot, too greedy
How could you leave me
When I needed to possess you?
I hated you, I loved you, too..."
Kate Bush 1978
Doesn't that sound deliciously gothic and angsty!
It's been 3 long years since I last donned the red dress and danced on the wild and windy moors. 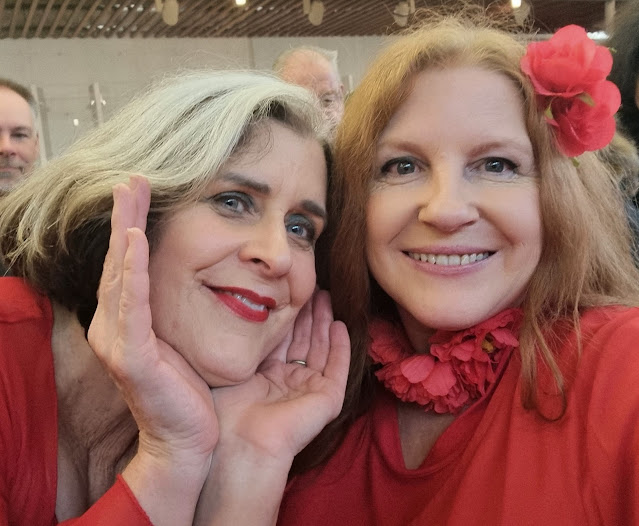 It was once again time to join the Cathies of Canberra for The Most Wuthering Heights Day Ever (TMWHDE).

"I bloody love Kate Bush! Please tell me what is this thing?" I hear you scream excitedly.

TMWHDE was inspired by Shambush's The Ultimate Kate Bush Experience, which took place in 2013 in United Kingdom, as part of Brighton Fringe, created by performance collective Shambush! They were attempting to create an unofficial world record for the most people dressed as Kate Bush. 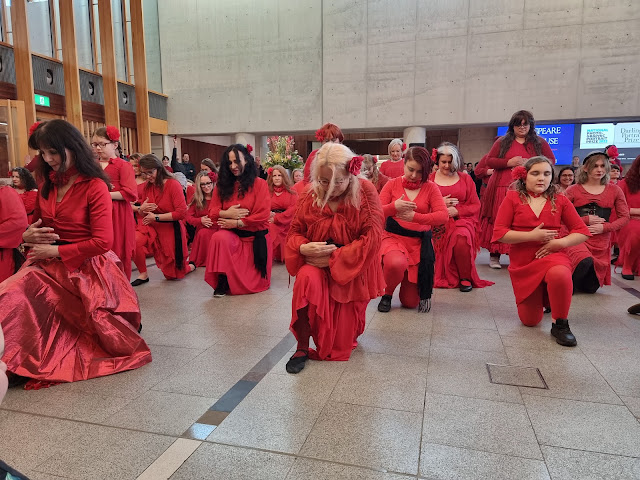 This most wonderful event happens in many cities around the world each year. The Canberra Wuther uses the opportunity to raise money for the Domestic Violence Crisis Service ACT.

Participants have come to be known as 'Cathies' as Kate Bush was singing her song from the perspective of Catherine Earnshaw from Emily Bronte’s 1847 novel of the same name.

So basically a bunch of Kate Bush fans dress in red and prance around copying the dance moves from a music video from the 70s. Doesn’t that sound freaking bonkers and wonderful?

I joined my aunt Libby who is my fellow Cathy in Crime. We previously wuthered in Canberra in 2018 (blog post on that here!), then wuthered in Melbourne in 2019. 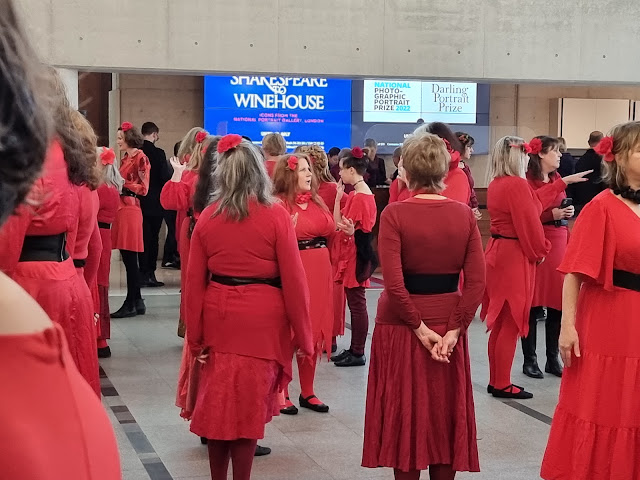 We've decided the Canberra Wuther is our favourite. The Canberra Cathies are a diverse and enthusiastic coterie. On this particular day there were all ages and genders. I even saw a 12 year old fella wearing a red tracks suit who had his moves down pat.
Our Wuther was held in the foyer at the National Portrait Gallery because in true Canberra style it was like 6 degrees or something and bloody freezing!
The gallery currently has an exhibition called Shakespeare to Winehouse: Icons from the National Portrait Gallery London and one of the paintings in the collection is a portrait of Emily, Anne and Charlotte Bronte which was painted by their brother Bramwell.  The curator of the gallery Jo Gilmour declared as soon as they knew the exhibition was coming to Canberra she wanted the Canberra Wutherers to come and perform our annual Wuther at the NPG.
If you're interested you can have a little perve at us wuthering...
After the Wuther we wandered down to the National Library for much deserved coffee and cake. The Bear and I hired some of those electric scooters that are infesting cities these days. 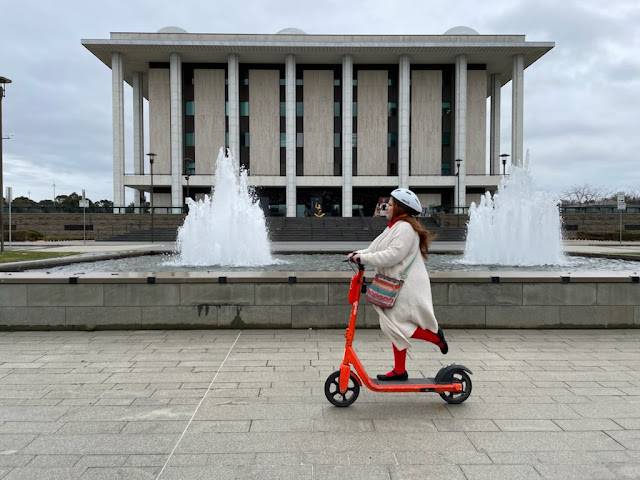 The cafe in the National Library has these massive stained glass windows. Just beautiful! 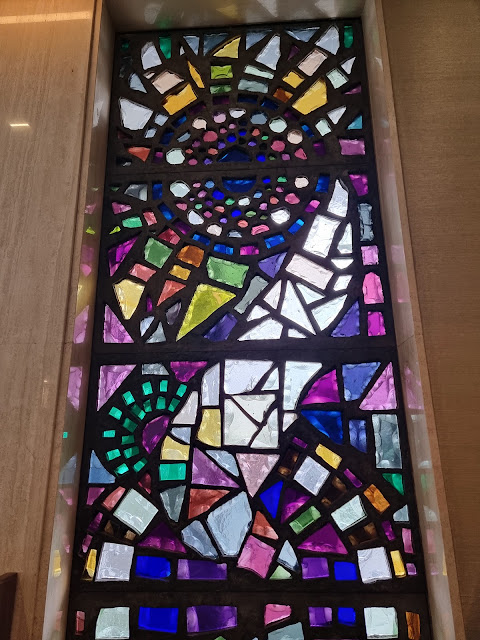 Just a few hundred metres away was a Christmas in July festival. The weather was cold and blustery but many hearty souls were wandering around sipping cups of mulled wine and listening to Christmas carols played by wandering musicians.
For almost the whole rest of the world Christmas means snow and winter and mulled wine and all the cold weather things. But in Australia Christmas is smack bang in the middle of summer.  For us Christmas means sun and seafood and Santa in thongs and inflatable pool equipment in your Xmas stocking so the idea of trying to have a cold 'Christmas' is a real novelty.
There was a small troup of musicians from the Canberra City Band playing Christmas carols. This was rather special as I used to play trumpet in the Canberra City Band when I was a teenager. 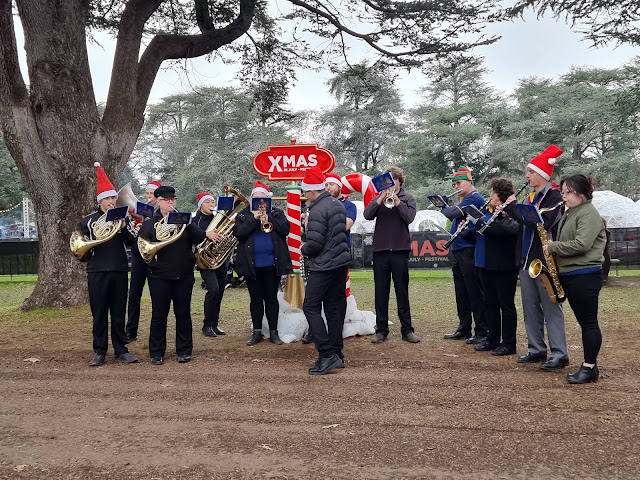 A lot of people associate Christmas with that whole Nutcracker Suite thing with the characters that look like this. I have a confession to make... I can't stand them. They look bloody creepy. 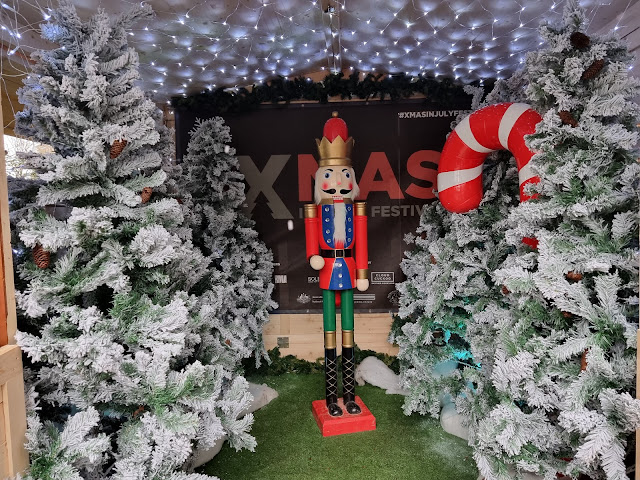 Come on. I know you agree with me. Check out this guy. 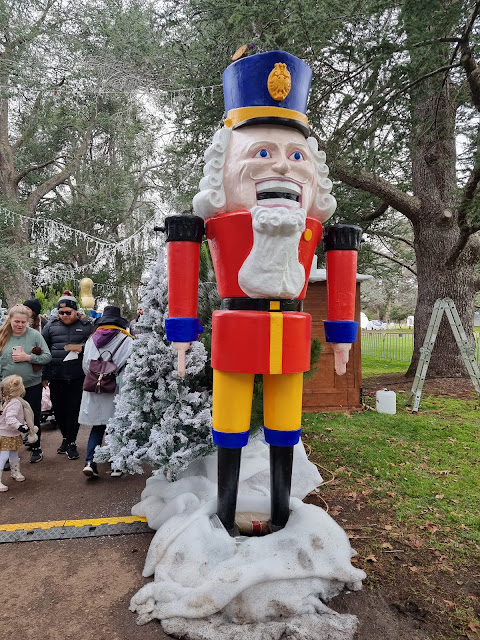 Who does he remind you of?
Yep. 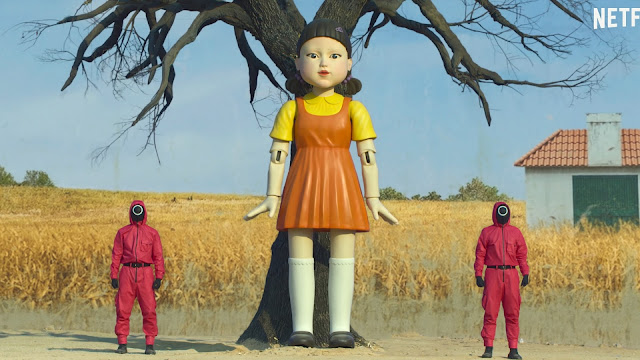 To make it more 'Christmassy' there was 'snow'.
It was so not snow. It was some sort of weird soap bubbles! My lips are hideously pursed together so I didn't get any in my mouth. 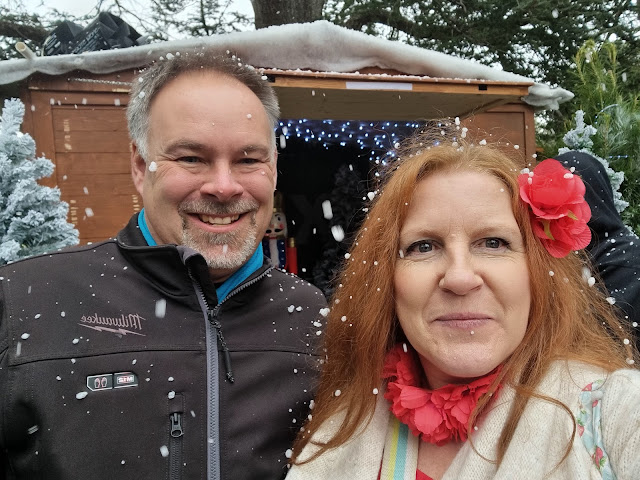 The next morning I had the extreme pleasure of taking the Bear to one of my all time favourite places called The Green Shed.
The Green Shed is part of both the rubbish tips where they sell pretty much almost anything except household waste. My friends and I frequently used to visit to look for 2nd hand furniture, garden supplies, old dvds for bored kiddies etc. 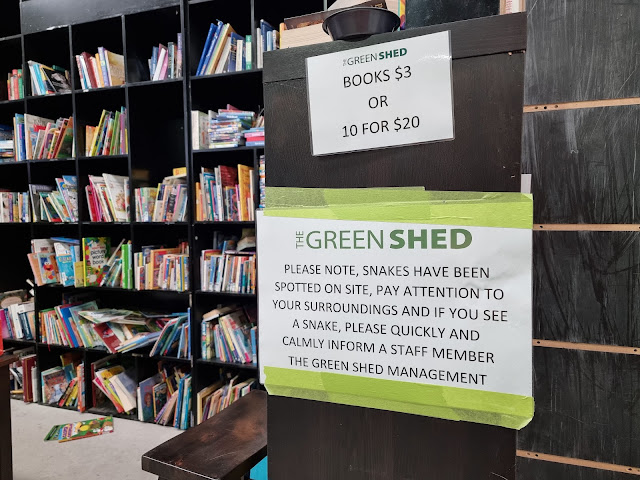 Since moving to Melbourne in 2011 I have frequently complained that there is nothing like it here. Why??????? My local council recently put up a post on Facebook about encouraging residents to reuse and recycle more. So I added a comment asking why there wasn't any kind of place in our area or in Melbourne like The Green Shed and left a link to the website so they could check it out for more information.
I'm extremely confident it will get all the attention local councils give to any feedback they ever receive from their residents... 😒 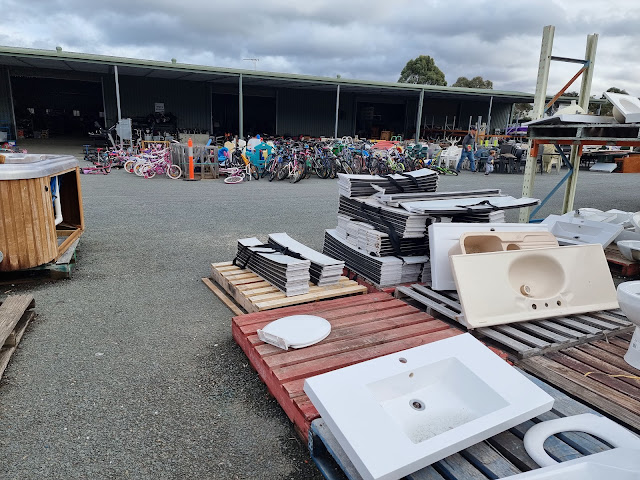 Which is such a shame. So much would be saved from being dumped in waterways and parks or unnecessarily disposed of in landfill if we had more places like this in Melbourne.
The Bear loved it. If we had travelled up with a trailer we would have gone home with no fewer than 2 vintage cabinets, a fish tank, a Speedwell bike, and a whole bunch of weird tubing from a broken spa.
Mourning the loss of the wholly unneeded but very much drooled over vintage cabinets, we drove over to the Old Bus Depot Markets where I filled the vintage cabinet hole in my life with a Nutella Croffle. 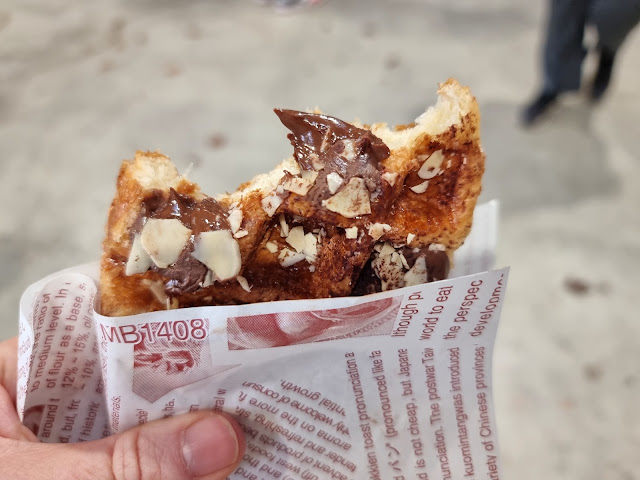 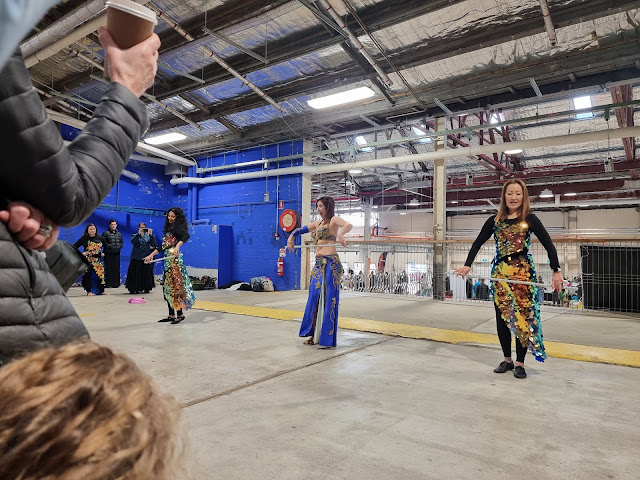 Bandit the cat was fascinated by them. She sat there for ages watching bellies wiggling and hips gyrating. 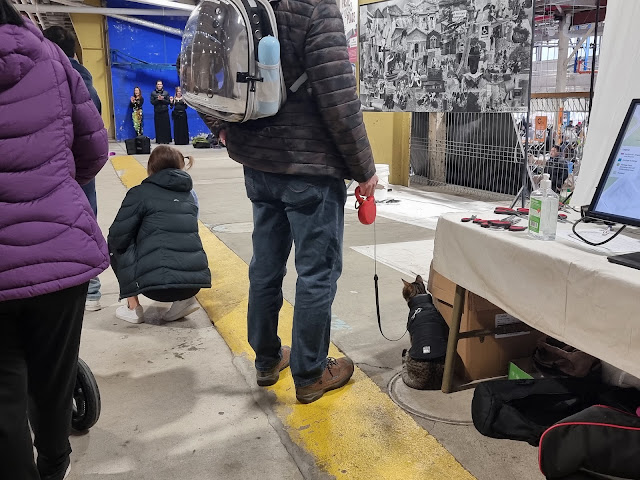 The Glassworks are right next door. 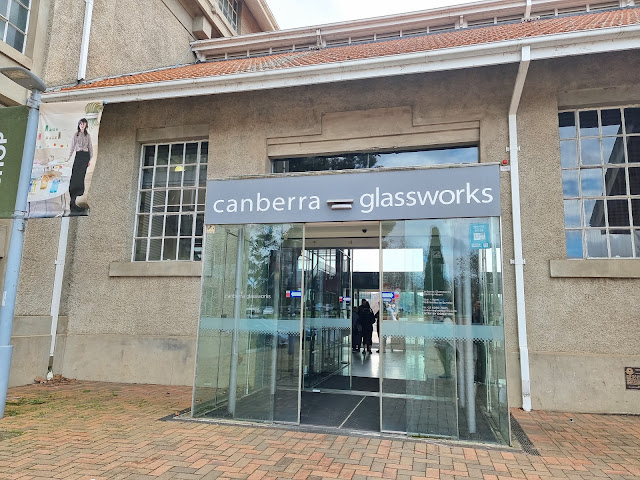 I asked the Bear if he would do over our wheelie bins in glass mosaic. 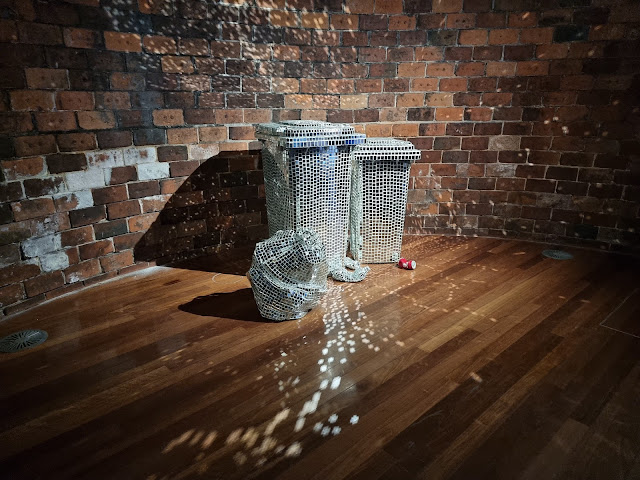 A glass blower was making glass decanters that are a replica of Daniel Riccardo's boot. 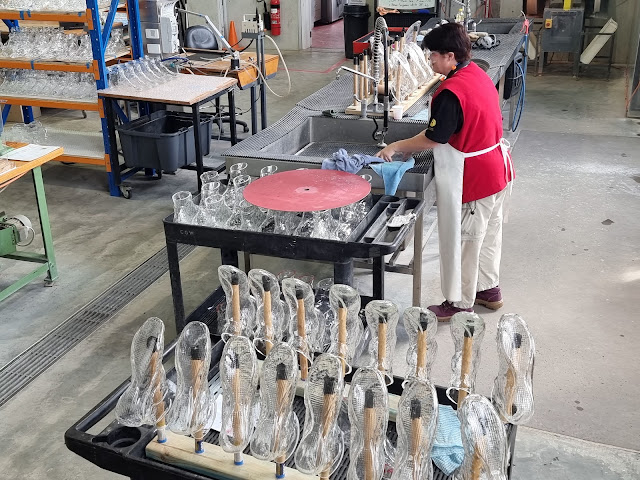 We drove past Prime Minister Albanese's house but he wasn't home. He had gone to France to apologise to Macron for our last Prime Minister, then had a stopover in Kyiv on the way back. I was sorry I missed him. I would have left a note but there was no paper in the car. 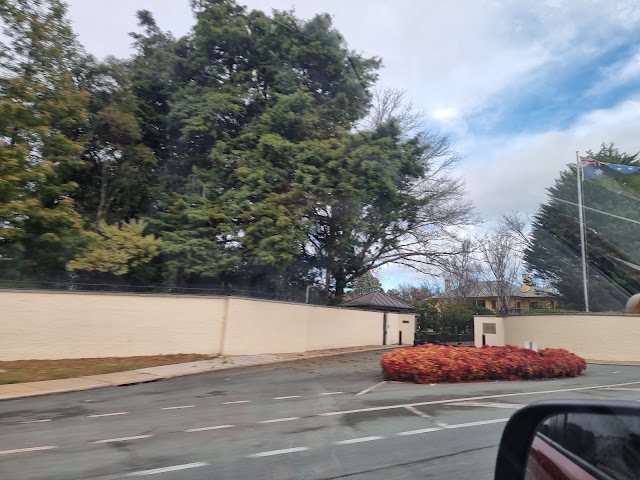 I left my wallet at home so we popped in to the Mint. 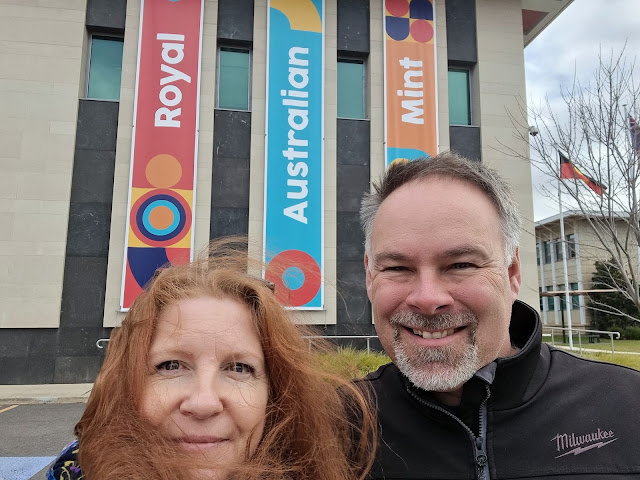 They'll stick almost anything on a coin these days including a Nissan. 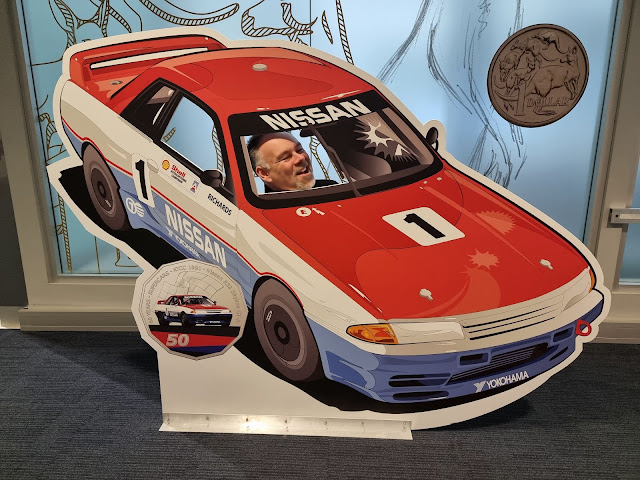 Money making happens down there during the week. 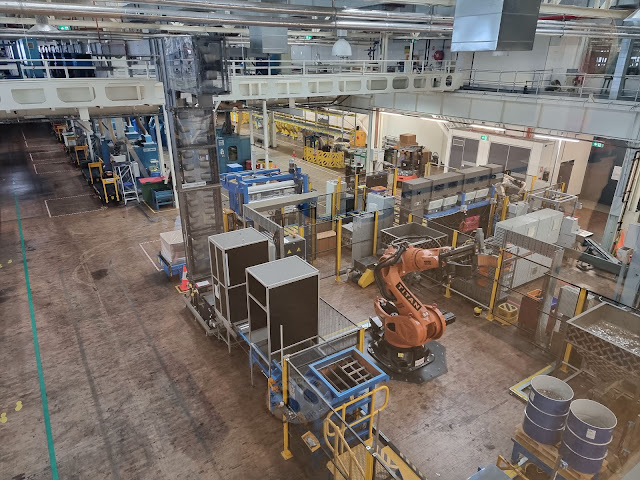 I love that people used to chop up their coins in the old days. How much could you chop them down to? What happens if it's so small and thin you can't tell what it's supposed to be a fraction of? What happened if it was a thin sliver, you put it in your pocket, then it kept stabbing you through your clothes? I have so many questions... 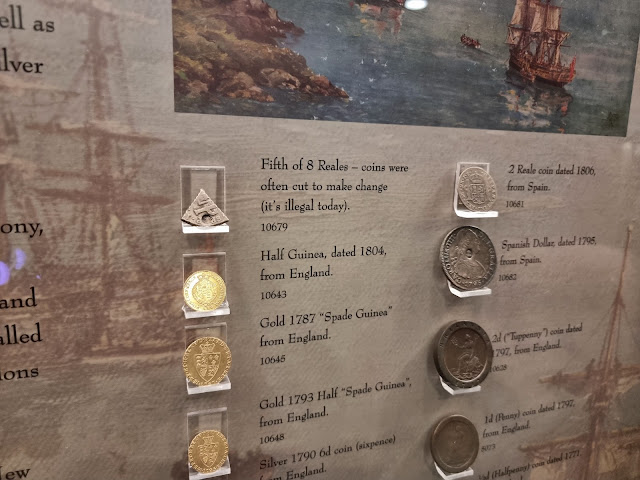 As I said, they'll stamp anything on to a coin these days! 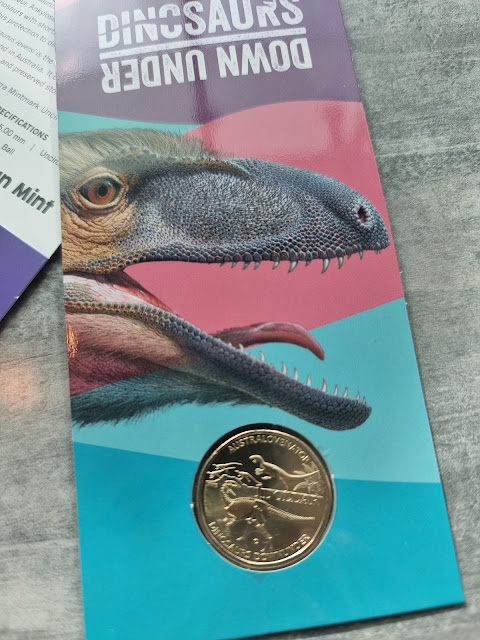 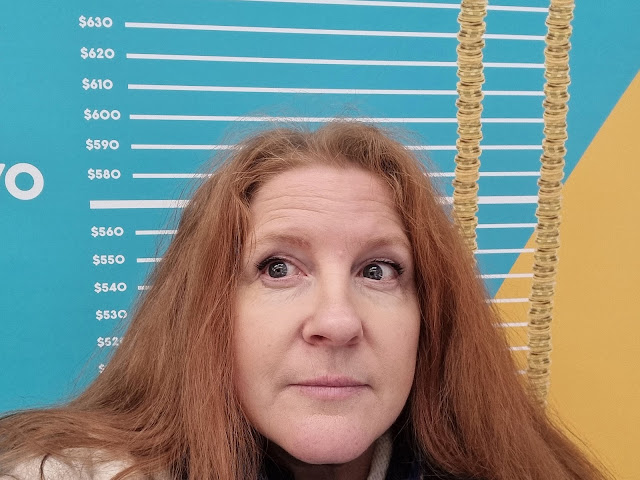 The last hours of Sunday were spent zipping through parks on more electric scooters, and then dinner with family. 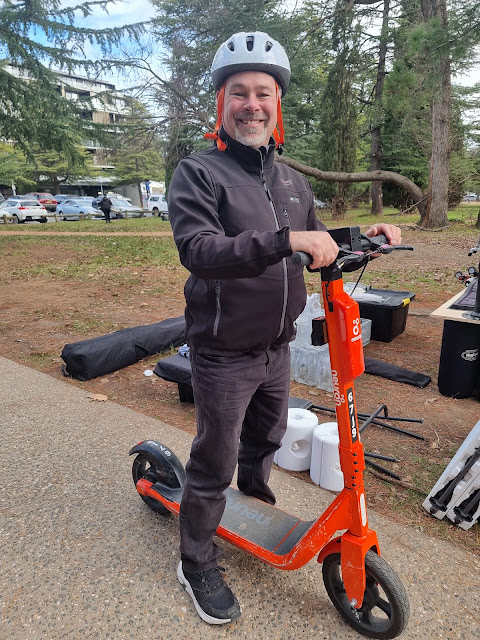 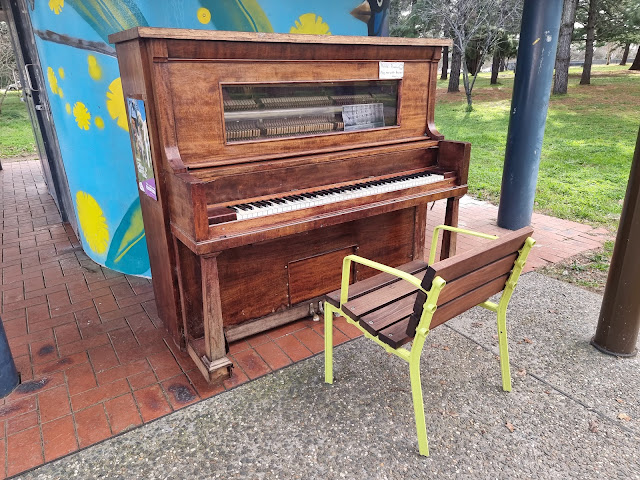 Have you wuthered anywhere in the world?
If there is a wuther near you I thoroughly recommend it. There are no prior dance skills needed and many of them raise money for local charities.
Louise
Red Dressed Amazona